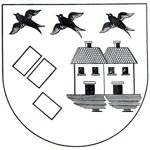 Blahutovice is situated on the western hillside of Blahutovický kopec at the road from Jeseník nad Odrou to Dub. On a part of the municipal territory spreads the Hrabětický forest. The village is firstly mentioned in 1499, as Blahutowicze, when it was a part of hranické estate. After the Thirty Years´ War the village was depopulated and germanised (Blattendorf). Since 1850 they were independent until 1976, when they were integrated to Jeseník nad Odrou.

The village has not its own coat of arms. On a seal from 1866 was a view on indicated grounds depicted and two rural houses, above which three birds float. From the significant sacred buildings in the village is the chapel Visitation of Virgin Mary worthy of mentioning, also the forest chapel Our Lady of Lourdes and the monastery. In the village there is a cultural house with a restaurant, a library, a children´s playground, a bus station, a grocery, a hostel in the monastery.

The residents´ social events illustrate i.e. the Blahutovický Fishing Contest for women and children, the traditional social ball, the masked ball, the Maypole Building and Felling, St Nicolaus Gift Giving, Children´s day, the Football Tournament and many more. Many events are organised by the society Bayerův odkaz (Bayer legacy) in the monastery. In September 2012 was the Francis pilgrim’s route festively opened and blessed. It is so far the only one in the Czech Republic, which is dignified with forty other Francis pilgrim´s routes in line up in the whole Europe.